England - what are some possible reasons that my ancestor only listed his daughters in his will and none of his sons?

I found the will of my 3x great-grandfather.

He had several children:

First of all, I am having trouble reading the document. Is there some place to get help for that?

Secondly, from what I can read, I notice that he named one of his sons as the executor of his will and he left all of his money to a few of his daughters and none to his other son or other kids.

What are some possible reasons for this? 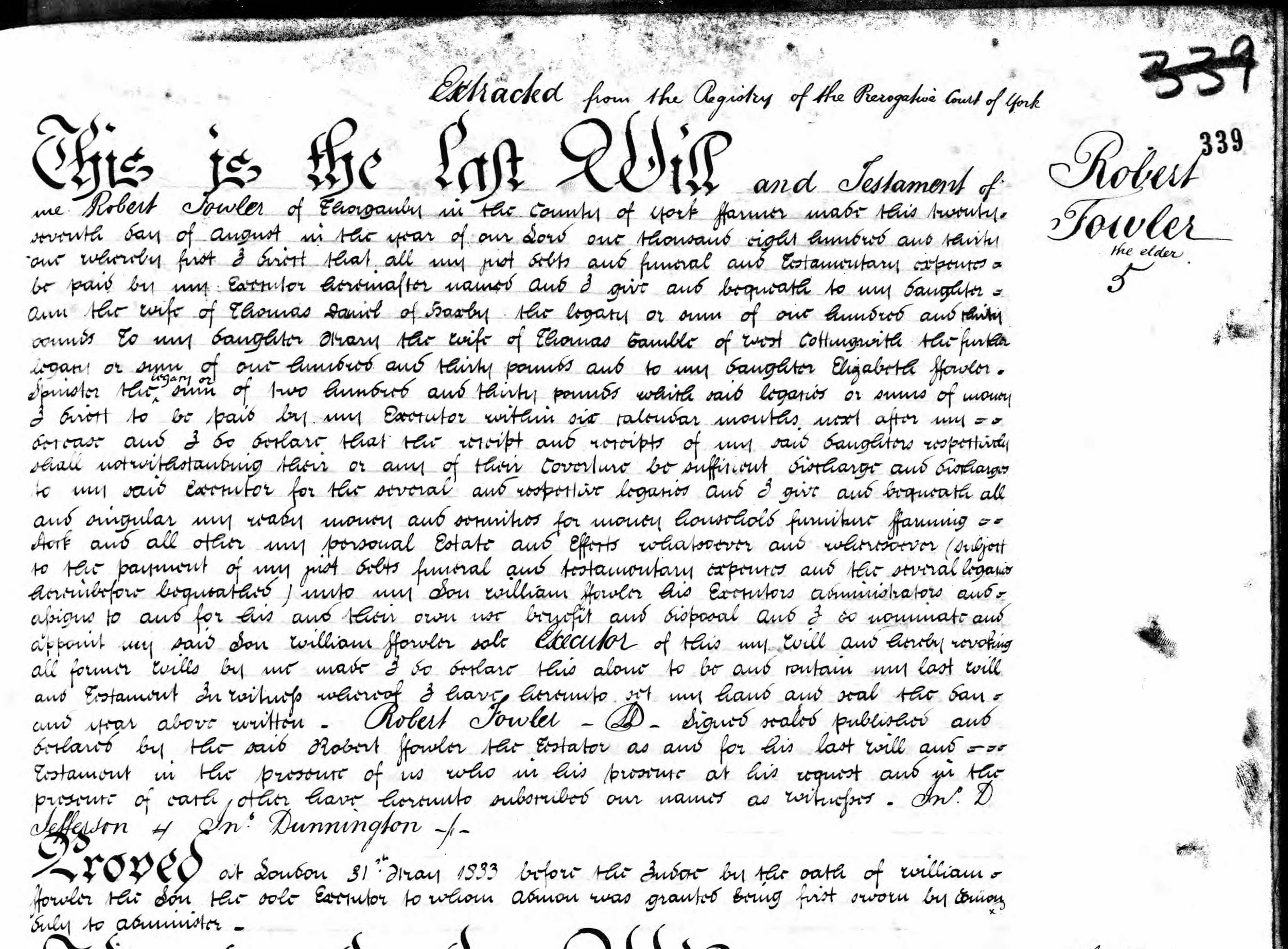 The obvious thing to check is whether the other children had died prior to the will being drawn up.

To help you in this case, I have transcribed the will below:

Extracted from the Registry of the Prerogative Court of York

(Note that this was transcribed an a small screen, so transcription errors and typos are possible)

As you can see, Robert Fowler (the elder) left cash legacies to his three daughters Ann, Mary, and Elizabeth, with the remainder of his estate being left to his son, also named Robert.

I would therefore check the local parish records to see whether the other named children, Thomas, William, and Jane had already died before the will was drawn up in 1831 (this would certainly not be unusual at that date).

Note that land holdings generally passed by common law to the eldest son at that date, and so were often omitted from wills.

There are several good tutorials available online which will help you learn to read old handwriting. The Palaeography Tutorial from the National Archives is one excellent example, but an online search for reading old handwriting will reveal many others.

However, even after you have mastered reading old handwriting, some of the terminology in old wills can be challenging. Fortunately, again, there are several good guides available online, including (for example) the guide to Probate Records from the Society of Genealogists. Again, an online search for probate records genealogy will give you other options.

In addition to checking the deaths prior to the will.

My guess is that his sons were given many perks while he was still alive -- perhaps businesses, land, or cash -- while his daughters had to wait for their share.

5
Where to find Will of Giles Chichester from 1820s, probably in Somerset or Guyana?
8
What are some possible reasons that a father's name is missing from a birth certificate - England?
1
Why is my ancestor missing from the New GRO Index - England?
1
Where can I find more detailed prison records - Stroud, England?
4
Did my potential ancestor lie about his wife dying so that he could marry again?
2
Dealing with different birthplace and names of parents in England?
1
Deciding between two baptism records from ca 1744 for Thomas Fowler of Thorganby (Yorkshire, England)
11
England - What are some possible reasons an ancestor would name his accountant in his will as a beneficiary?