Who was in Edingley Cricket Club in 1920?

I have a photo of Edingley Cricket Club from Nottinghamshire in 1920 (helpfully the photo is titled and dated). I would like to attempt to identify the people in the photograph. Might there be a list of club members for that year archived somewhere? If so, where? How else might I find out who was in the club in 1920? The difficult step may be matching the names to the faces, but I need a list of names first. 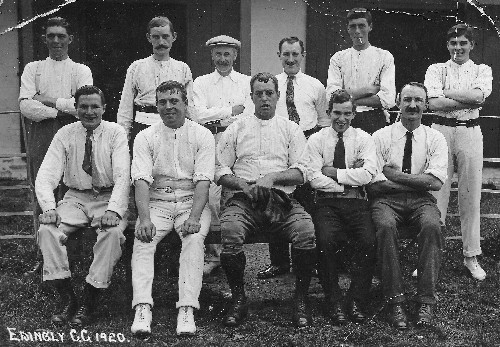 This might be tricky. For starters, it looks like the club is no longer extant. Local club Farnsfield's homepage reports their "recent acquisition of the Edingley Cricket Pitch".

The Edingley club itself was at edingleycc.com, but that site is no longer active. The Internet Archive did manage to scoop up the site, though. Their "About Us" page has the dates 1946-2009 and states:

Regrettably we have no records for the years prior to the second world war...

The club was re-formed in 1946 ... The ground was basically a rented farmers field, which on Sundays was transferred into a cricket field. We played our cricket in the Mansfield Sunday League...

That suggests that the Edingley ground in your photo need not be the same one that they played on in the later 20th century. And there is no direct continuity between the 1920s club and the later incarnation. The same page claimed to have sponsorship up to 2011, which is the date of the last IA archive, so I'd guess the club closed by around that time. The Farnsfield club might know more. There is an email address for Edingley on the archive pages, but no guarantee that the account is active, nor that anyone reads it.

This cricketarchive.com list of sites where the Nottinghamshire County Cricket Club played includes Farnsfield but not Edingley, so the ground was probably quite minor even within the county. Cricket Archive has a page for Edingley. The players list linked from that page only covers 2009-2011 though. This play-cricket site for Edingley cc spans 1994-2011 (and has a results table suggesting they weren't very good!).

A cricketarchive.com list of sites where the Nottinghamshire County Cricket Club played includes Farnsfield but not Edingley, so the ground was probably quite minor even within the county.

It's not clear where any surviving records might be kept. I doubt even Wisden goes into sufficient depth to cover such a small club, but it might be worth investigating a ~1920 copy if you can find one. If you can find records for any other Nottinghamshire club in the same era, you might find scorecards for their matches against Edingley, which should give a list of players names.

It looks like the county ground, Trent Bridge, has a substantial library. Most of it probably concerns the ground and the county team, but it looks like they have plenty of other material too, so it might be worth getting in touch with them.

This is not a comprehensive list, but here are some ideas to start with.

The principle for researching an organization is the same as what you do for a person: start with what you know, and work backwards and forwards in time from there.

You may not be able to get a complete list of members to start with, but if you can find any names, searching for those names might make it easier to turn up a complete members list.

Not the answer you're looking for? Browse other questions tagged england photo-identification 1920s nottinghamshire sport or ask your own question.

13
Identify people in 20th-century photos once the older relatives are gone?
3
Interpreting the year a 16th century will was written?
4
Who raised two orphaned children in 1765?
5
Narrowing down date of immigration from England to USA?
0
Locating relatives in 1920 Siberia
5
Finding person missed in 1920 census?
5
Estimating when photo of ancestor who lived 1833-1902 was taken?
6
Missing Enumeration District/Families in the 1920 U.S. Census
6
Who was my grandfather's first wife?