How do I corroborate Charles Foster's military service (circa 1880)?

At one point I came across information that he was a retired Colonel (I'm assuming with the US military.)

I have found an 1880 Census record of a Charles Foster employed as a soldier at Fort D.A. Russell in Wyoming. If it's not the same Charles Foster then I'm not interested in this record - I only mention it to show what I've found thus far.

Where would I start looking to corroborate Charles Foster's (1849-1929) service record?

Your ancestor, Colonel Charles Jay Foster was reported a retired jeweler at the time of his death. [See the earlier posted San Francisco funeral home reference]

Geo. ... Shreve & Co., aka Shreve & Co., is reported by today's Wikipedia as the "oldest commercial establishment" in San Francisco.

Charles J. Foster appears in various San Francisco Directories between 1889 (the time of his marriage) and 1880 (the date of the census entry about which you have inquired). (He probably appears in all the years, a few are listed below.)

At San Francisco in the 1880 U.S. census is one one Chas. J. Foster, age 30 [indexed as 20], b. New York. Link here to the FS index; partial snippet below from Ancestry. This Chas. J. Foster is enumerated as a lodger in what seems a boarding house. (Page and image is not in good shape; other than to say it doesn't seem to be "Pine," I can't make out the street.) Occupation is "merchant"; entry remarks that he is "out of the ?city." 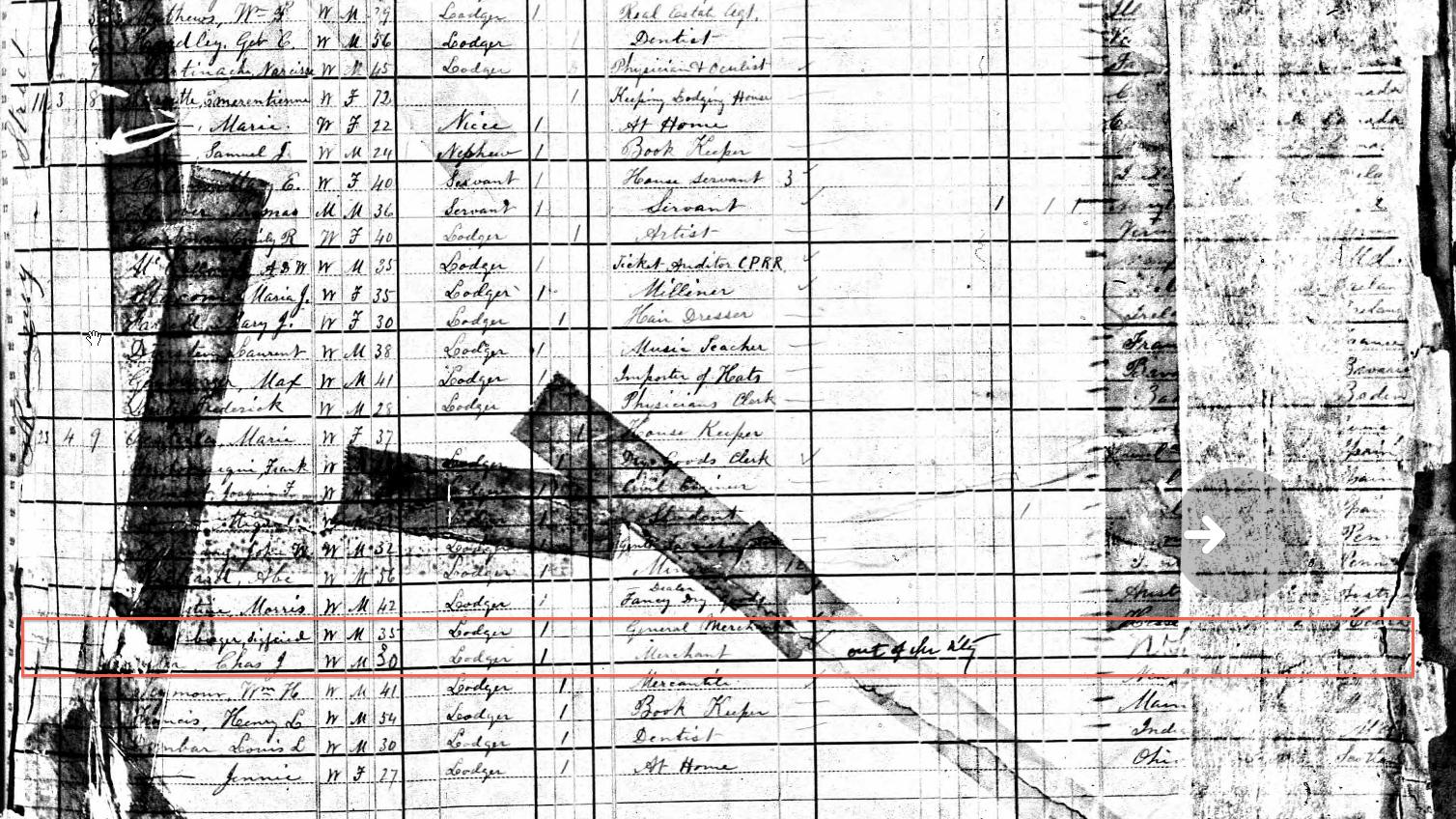 SFgenealogy.com has other San Francisco information and directories online. There is probably a better way to navigate to it, but I used their page, "Index of ... Directory." to view images from Langley's 1879 San Francisco Directory.

I guess this is a long way of saying your Charles J. Foster was probably enumerated at San Francisco in 1880; he may be the man in the census entry provided. He likely resided there at least by 1878.

Your Charles J. Foster does not seem to be the man in 1880 stationed at Wyoming.

Would think it is possible for you to keep "inching" him back to see when he stops appearing in the San Francisco directories.

Wikipedia, "Colonel (United States)" suggests this military rank, "became rare" in the period after the Civil War; also "many brevet colonels were appointed again during the Spanish American War, prominent among them Theodore Roosevelt and David Grant Colson."

Although I suspect news about the time of his engagement and marriage would be a more timely reference, information follows that might help you locate an obituary. Have also included a news item that refers to him as "Colonel Charles Jay Foster."

On the trail of the obituary:

With a 1929 death, there is at least a good chance the cemetery or mortuary has a copy of his obituary, or at least a newspaper reference.

Ancestry's collection of "San Francisco Area Funeral Home Records, 1895-1985," entry for "Charles Jay Foster" (dec'd 9 May 1929), reports the mortuary as N. Gray and Company; reports his occupation as "Retired Jeweler." More about this mortuary and records on www.sfgenealogy.com; http://www.sfgenealogy.com/sf/sfranlib.htm#researchity. (Seemed to me perhaps better luck with the cemetery.)

Here is one of the news items; a dramatic story of the shooting death of a young woman. Charles Jay Foster is called "Colonel Foster." The woman killed is, it seems, his wife's niece. Oakland Tribune, January 14, 1913.

If Charles Foster had retired from the military as a Colonel then I would expect there to be some mention of that fact in his obituary. It would not be uncommon to list both the units in which he served and any action in which he participated.

Have you searched the papers around the time of his death? It would be worth considering both east and west coast papers. If he had a distinguished career that might be acknowledged in his birth place as well as where he died.

Updated: Have you looked at Chronicling America as a source of newspaper titles and their publication history.

I discovered a PDF of an 1879 San Francisco directory that has Charles J. Foster as a salesman for George Shreve & Co. The Charles Foster in the 1880 census is not the same man.

13
How can I get all the military records available through NARA (USA) for an individual veteran?