What was the "Old War" and how should I interpret this pension index card?

Jeptha Tallant is listed under the heading "Old War" -- which war is it referring to? I believe he was born in 1811, so the Revolutionary War doesn't fit.

Also, what does the "Rej." heading mean, and the "Invalid" column, and why does it seem like his file is connected with the name Eleazer Bulkley?

Finally, should I expect to find any other records somewhere? I've had good luck digging up treasures in some pension applications.

For images of the blank cards, see Card Records in Use in the Bureau of Pensions, 1916 (U.S. Government Printing Office, 1916).

For another timeline see the table American Involvement in Wars from Colonial Times to the Present on the American History section of About.com.

I went to Fold3 to puzzle out what the source of this image might be -- as ColeValleyGirl says, it's important to have the context in order to analyze this record.

I don't have a current Fold3 membership, so I can't see the premium images, but here's my best guess as to where this came from. Choose the timeframe "Mexican American and Early Indian Wars" and then the collection Pension Numerical Index aka Numerical Index to Pensions, 1860-1934. That collection seems to have a card format similar to the image richardtallant posted. Fold3's catalog says:

This index complements the Civil War and Later Veterans Pension Index (T289), as well as other pension indexes and files, in assisting researchers in locating pension file numbers and names of Army and Navy personnel, as well as widows' pensions (marked with a w) on the card. It is a superb cross-referencing tool when deciphering illegible or missing numbers within other indexes. Both certificate numbers and application numbers are included.

NARA's blog: Family Tree Friday: Pension Indexes Examined has an explanation of how to read the index cards. The Fold3 catalog says these cards are from NARA A1158, which was not yet online at Fold3 in December 2010 when the blog post was written, so the example cards shown for that blog post are probably from a different Numerical Index than the series we want to examine. However, the example given in the blog post says:

See what I meant about being confusing? The number appears in the upper left hand corner. Along the left side of the card, you will see “Invalid” and “Dependent,” and then “Orig” (meaning application) and “Ctf” (meaning certificate). Since we’re looking for Lazarus White’s certificate number, look under Invalid, then Ctf. Look to the right, and you will see Lazarus White’s name and unit. So now we know that the number 920,628 is correct.

Unfortunately the author of the post does not show a portion of a card which has the same legend as the "Old War" section, so there are no clues to what the "Rej." stands for, nor is there any clue as to what period "Old War" means.

Now I wondered: if the records of the War Department were reorganized at some point, could "Old War" refer to a filesystem and not necessarily a specific war? Could it be a catch-all term for all the wars prior to 1812? The position on the card suggests that (at least to me).

This microfilm publication reproduces a card index to the "Old Wars" series of pension files, 1815-1926. These files relate chiefly to claims based on death or disability incurred in service in the Regular Army, Navy, or Marine Corps between the end of the Revolutionary War in 1783 and the outbreak of the Civil War in 1861.

The entry portal for Research in Military Records led me to the Prologue article An Overview of Records at the National Archives Relating to Military Service. Author Trevor K. Plante writes:

The pension files in the National Archives are divided into these major series: Revolutionary War, Old Wars, War of 1812, Indian Wars, Mexican War, and Civil War and later. The records in each series are arranged alphabetically by name of veteran, except those in the Civil War and later series, which are arranged numerically by application, certificate, or file number. All series of pension application files have alphabetical name indexes.

For the Civil War and later pensions, consult National Archives Microfilm Publication T288, General Index to Pension Files, 1861–1934, which is arranged alphabetically by the individual's last name. The index cards include the individual's unit(s), making it easier to decipher individuals with the same name. Once you find the application number or pension certificate number, you can request to view the pension file. Pension files (including application files) often contain valuable personal information on soldiers, sailors, and marines not found in other records. For a listing of microfilm publications to other pension indexes and pension files, consult the National Archives' Microfilm Resources for Research: A Comprehensive Catalog (2000). For more information on pension records, consult chapter seven of the Guide to Genealogical Research in the National Archives (2000).

If you can find the file referred to with the number 18336 then perhaps it will become more evident exactly which war is being referred to, what the "Rej." means, and Jeptha Tallant's connection (if any) with the associated person Eleazer Bulkley.

Let's use what we've learned from the above to examine the card ColeValleyGirl found -- let's call it "card #2". [This card is from Microfilm series T316, Old War Index to Pension Files,1815-1926.] Note that it is stamped "Old War" and is for an application filed in 1851, class marked "inv" for "Invalid"? So the card richardtallant posted, card #1, is a pointer to card #2. (Clearly a pension application from 1851 cannot be for service in the Civil War, so it must be for earlier service, and as richardtallant pointed out in his question, the soldier is too young to have served in the Revolutionary War, so the service must be from somewhere in between. So the answer to the question of when he serves lies in his file, and further records might be found by deciphering the unit in the entry marked "service" on this card.)

Can we find a card for Eleazer Bulkley with a file #18336? (Researchers may not be able to find the corresponding file, because it appears that the right-hand side of that line on the card says "Missing".) Here is FamilySearch's index result for card #3:

This is clearly from a different period of service and a different area of the country, so it seems to me that the only association between these individuals is the coincidence of their file numbers.

WorldCat has listings for where the Guide to Genealogical Research in the National Archives (2000) can be found in libraries, including a copy to view online at HathiTrust Digital Library -- see page 173, section 7.2.2 for the explanatory matter on "Old Wars" and the sections following for more records pertaining to the individual conflicts.

In the section A1158, A numerical index, Melchiori and Prechtel-Kluskens says on page 42 that this index includes many different wars:

... the cards include several different wars -- Old War, War of 1812, Mexican War, Indian War, and Navy as well as Civil War army soldiers. (Old War refers to service in the Regular Army between the 1780s adn the Civil War.) This index can be useful if a published source connects a person with a common name to a pension file number without any military unit or other helpful identifying information.

NARA's guide Microfilm Publications and Original Records Digitized by Our Digitization Partners is also useful for cross-checking which NARA microfilm publications are online and where. Different sites can have wildly different image quality, so it can help to check them all if the image you find at the first site is difficult to read.

I would expect you could access the complete case file (if it still exists) via NARA.

The "Invalid" column names the disabled or deceased individual in respect of whom the pension was applied for. I suspect Rej. means rejected. However, the card is so inconsistently completed that I wonder if the row and column headings have any relevance, or whether it's just two columns of names of pensioners made using a card intended for another purpose. It would help if you provided more information about the source. 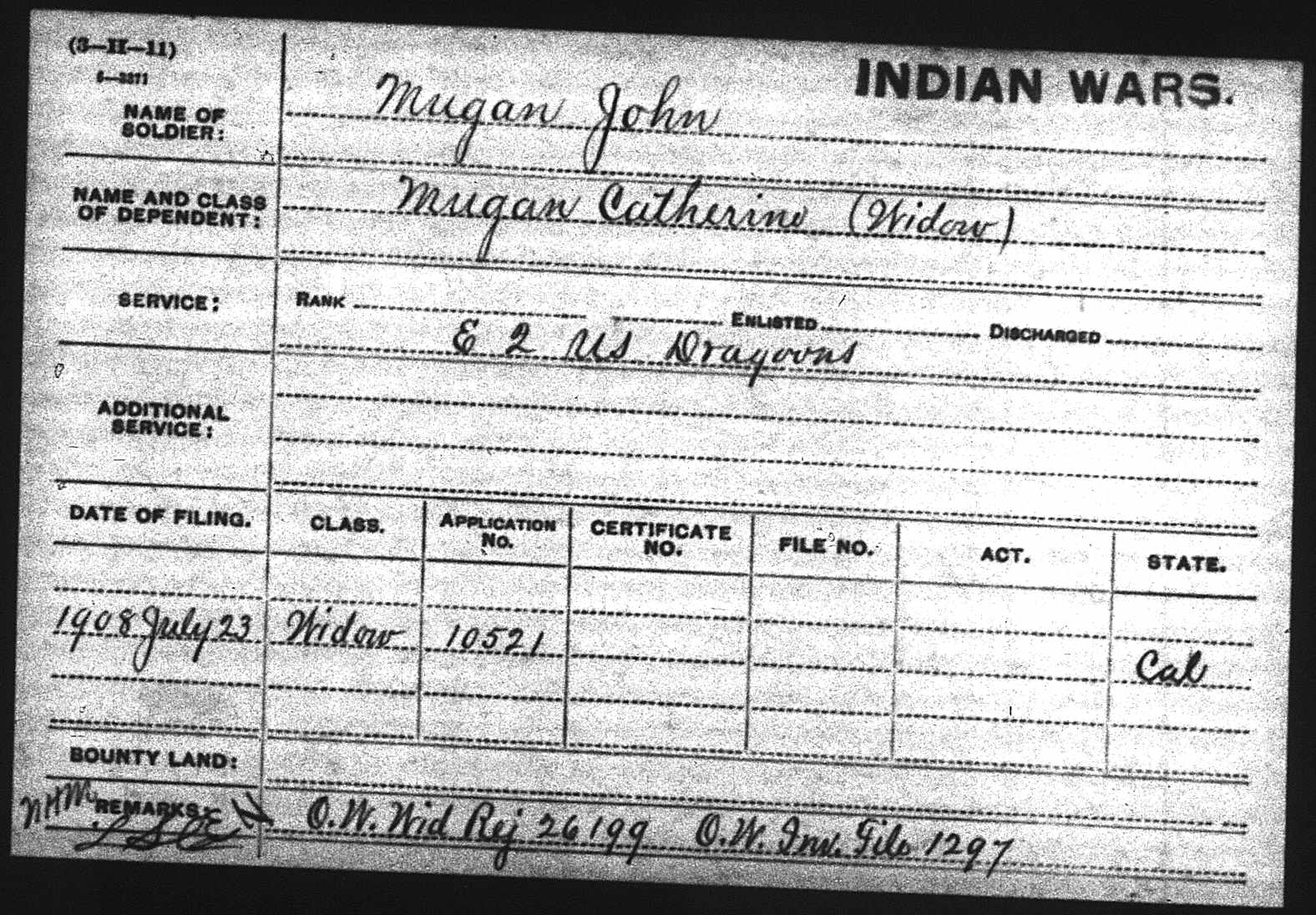 Here is an example of INDIAN WARS Pension filing by Widow of John Mugan. 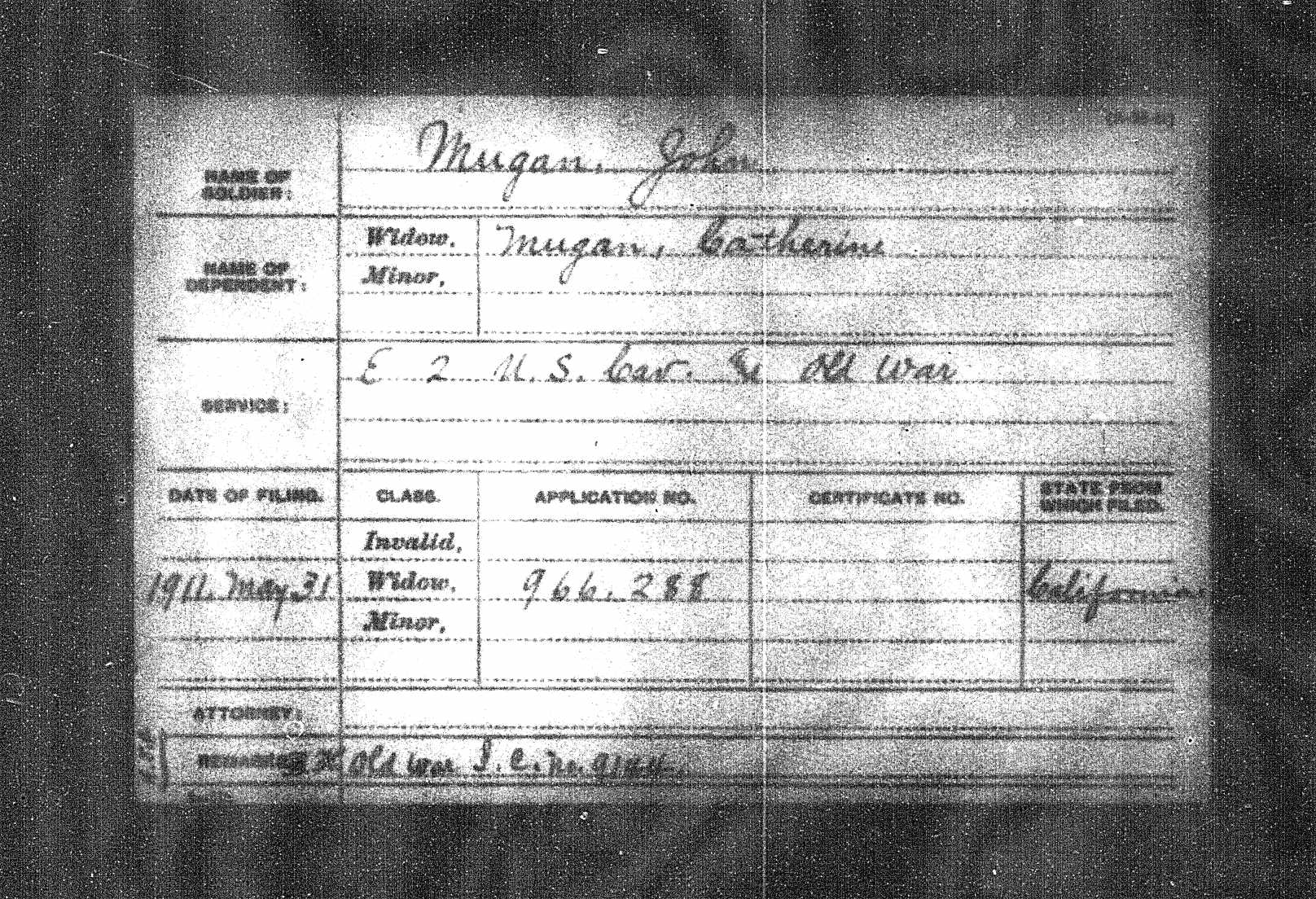 Here is the card for the second request for Catherine Mugan, widow of John Mugan. This card specifically states: 'OLD WAR'. We know from the previous registration card that the OLD WAR which John Mugan participated in was INDIAN WARS. We can read further and find that he was involved with the 2nd U. S. Cavalry Dragoons.

With further research we can find what the actual location of service was, i.e. where the 2nd Cavalry Dragoons fought/which battles they were involved in.

There is a website that covers the "OLD WAR", it's: http://www.gentracer.com/usoldwar.html

The "Old War" Period (1785-1861) includes the War of 1812, the Indian Wars, the Florida War, the Mexican War, and others. We have access to the microfilmed copies of compiled service records, pension records, bounty land warrants, and hereditary societies (United States Daughters of 1812, General Society of War of 1812, etc.)

I had a Great-Grandfather that was in the Old War and Indian Wars and want to understand what the information on the cards mean.

Not the answer you're looking for? Browse other questions tagged united-states military-records pension-records or ask your own question.

8
What does the "Copy of Record No" field on a naturalization petition index card mean?
7
Locating 18th/19th century grave in Massachusetts?
3
What entitity compiles the "US Public Records Index"?
7
How can I ensure that I am making a reasonably exhaustive search?
5
Civil War pension card listing alias and different wife?
2
How old was infant considered to be in US in 1850?
1
What does this Peninsular War medal roll say?
4
What is the meaning of the handwritten notation on the pension record of Charles Clements?
3
What is this abbreviation symbol in War of 1812 Pension File?
4
What is name of this Captain in War of 1812?